Well... We got through one of our high seasons at work - next is Easter, so now I have a small piece of quieter time at hand.

So all is needed now is the spark that gets me to really  make minis :/ 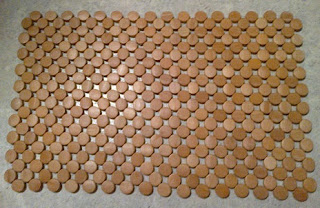 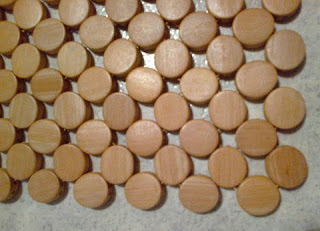 This is some kind of tablecloth / napkin thing and as you can see, it's made from Wooden buttons or disks what ever that is..
Well I immediately so in it load up on material for making flat Potion "bottles" and with small leather band strips they can easily turn out as wineskins or those water bottle things you see in old westerns - don't you think so??

2mm knitting needles and crochet hook went along with too.. 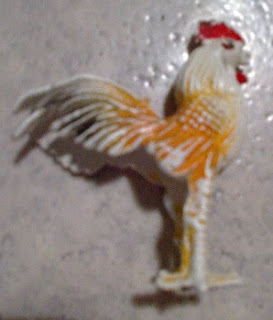 This rooster I had to take too - I'm going to try and make him a cart/wagon and some Easter thing on it..
I think I should paint him too - just don't know what paint to use... maybe just good old nail polish.. 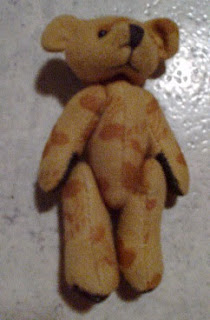 This little teddy is for the Santa's workroom - box.. 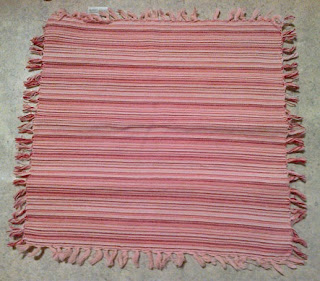 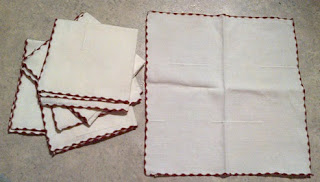 And 6 about same size napkins with 1 euro... I thought I would try some stitching this year.. Pillows or tablecloths/curtains or something - so these are materials for it.. 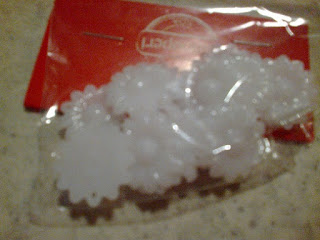 Some kinds of beads -  thought they would make nice jar lids.. 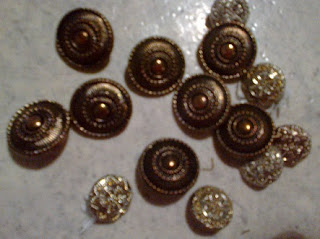 Some pretty buttons - for lids or something..

And then... just when I was about to leave, I took one more peek in the toy shelves - I had just found the teddy and rooster and thought there was nothing else for me to see..

I was turning my back and then I thought - what was that light blue glimpse that I saw in the corner off my eye??

And there in the at the far corner of the shelf - behind the other pair of goods hidden - was a pair off little "button eye" that staring at me - there was IT..
15 centimeters of pure cuteness, made out of some velvety fabric that it's really soft - it was love at first sight for me - and ONLY 20 CENTS!! 0_0 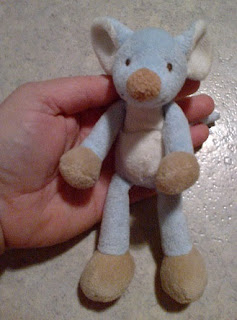 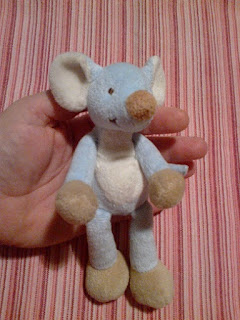 Oh I know some would call me silly - that I've lost few of my marbles or that not all the Moomins are in the valley and so on.. But I don't mind - it brings a smile on my face just to look at it and there aren't many things nowadays that do that - so I don't care what others think, it's my cutie and I love it.

For some reason it had its hands sewn stick to its stomach, but I cut the stitches off so it can move its arms and it's easier for me to dress it when I get some clothes to it..

I think I'm going to call it my little boy Blue :)  What do you think - would plain Blue be a good name for him???

He was with me at work yesterday -  sat on my craft bag making himself comfortable :) 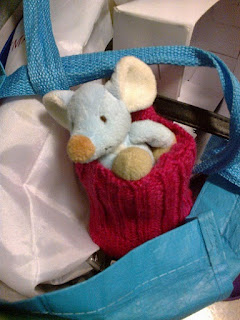 A warm place for him in my mittens 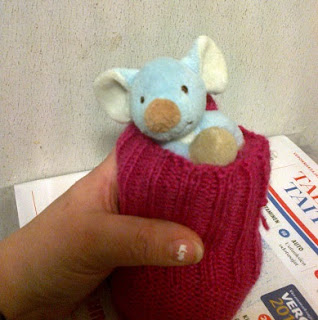 You might see him more often from now on... Time will show if his's a photobomber or not. 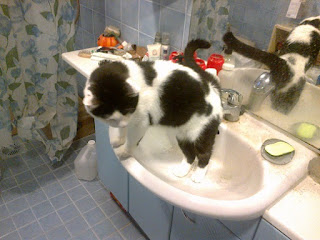 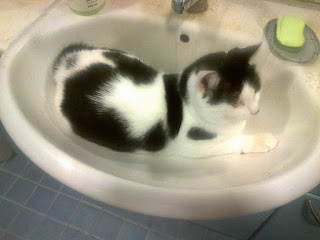 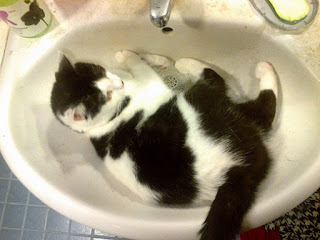 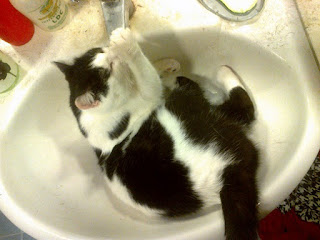 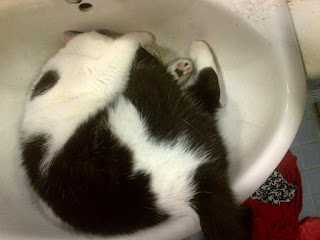 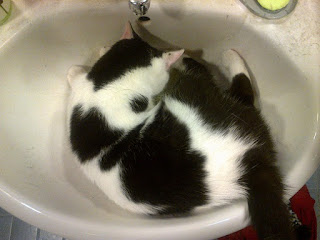 Isn't he a cutie too?? (^^)
Can't be very angry at him, he's just too darn cute to be yelled at. If you show him the door he just comes and sniffs your hand and then banging his head/marks your hand and jumps back and you end up laughing him - and then you carry him off to get your hands washed :))

I love both of my cat's but I think Pilkku is at the head by a whisker - he's more cuddly and social than Muru.. But they both have their own specialties they know to use to melt my heart - as all cat owners know..

Wish my girl would get along with him and hubby's cat better :(
Maybe thing get better when I get my financials in such order that I can take her to vet - she's not yet been cut, can't afford to do it yet, but live in the hope that she'll calm herself after gets her operation done..

Although we have been thinking that should we or should we not made one brood/litter for her before it..
The older we get the more cat crazy we seem to become..

I wonder will this be the year I would really get the courage to ask some one to make a swap or two with me... ?? Every time so far it has always ended up that I get a big bunny in my pants and don't even dare to ask cause I don't think my works are good enough.. and then I'd start asking about myself that who would seriously want any on my works... I'm too good at downing myself..
Nope... don't think it'll happen anytime soon...

My and Blue are off to think about what kind off clothes he should have and what color should they be so that he looks the best..
Lähettänyt NarinaNäpertää klo 6.39

Tietoja minusta/ About me