I got myself last week a little Christmas inspiration - let's just say it came and it went..

Because of it I made a Christmas "card" to a shop owner next to our shop - we've known her for about the same time as we have had our shop (May Day will will became 13 years from it) - so she has become a kind of a friend to us.. 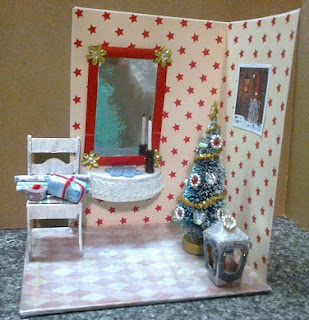 "Stripped" version for photography... Printed wall - and floor papers from net and glued them to pieces of cardboard to make the base.. 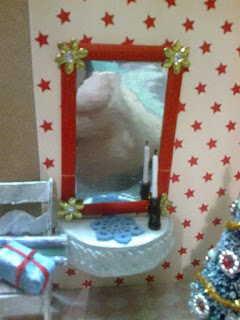 The mirror is made from the pizza box bottom and from a wooden tablecloth's strips and some sequins and pearls.
"fancy" little table is made from the pieces of cardboard and ribbon, painted with  nail polish - candle is a strip of paper wrapped around the sewing thread + glued to the pearl.. The tablecloth is a small Christmas craft decoration - I think its wool or something like that.. 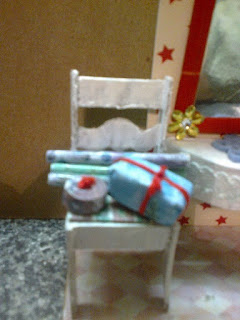 Chair is made from the pattern I found here .
It's made - surprise, surprise... Cardboard and painted with nail polish.. Made few gift paper rolls and gifts from prints from net.. The chair's "pillow" is paper print too. 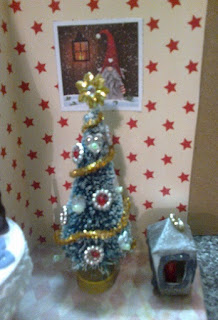 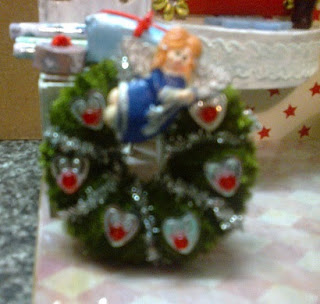 Wreath is made by wrapping velvet yarn around cardboard disk (like hat brim - you know...) and same kind of ribbon as in the Christmas tree, but in silver  - I used same heart sequins as in the tree, but with red beads..
And little angel decoration is trying to be like cherry on the cake ;) 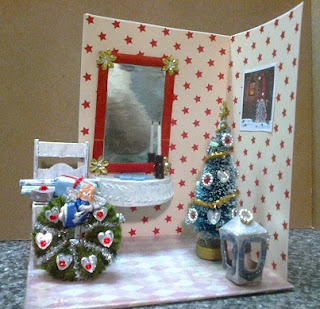 This is how is looks as finished.
I added the elf picture to the wall so it wouldn't look so empty - and lastly I made a lantern too..
There was also a little card we I wrote merry Christmas wishes and it had mine and hubby's signatures in it..

Later she told me she had it on her sales counter next to her cash register the whole week and there had been two customers whom would have wanted to buy it.
So I guess it's safe to say, it was liked. And certainly one of a kind version *grin*

Here's some flea market finds I forgot to show you last time (pictures were in a wrong place..) 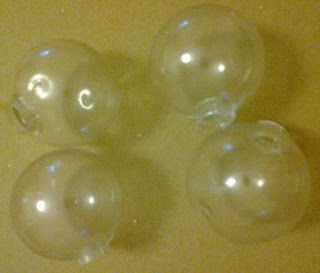 These are small Christmas decoration ball stuff, but to me they are laboratory supplies.. 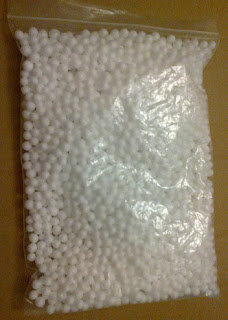 A whole bag of snowballs ;) 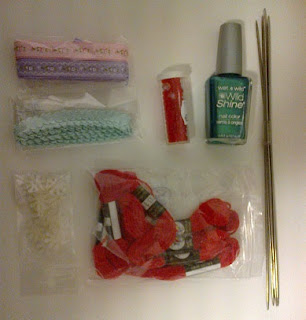 Ribbons... beads - LOVE the snowflakes... nail polish, color was so nice I had to take it.. some embroidery thread and knitting needles for miniature making purposes..

And I saved from work for my own use this.. 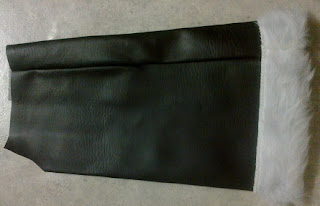 It's a boot from a Santa costume - we had an odd package where there was three of them instead of two. So I took it to use it to make something nice in miniatures - book covers, clothes who knows - time will tell..
Lähettänyt NarinaNäpertää klo 9.41

Tietoja minusta/ About me